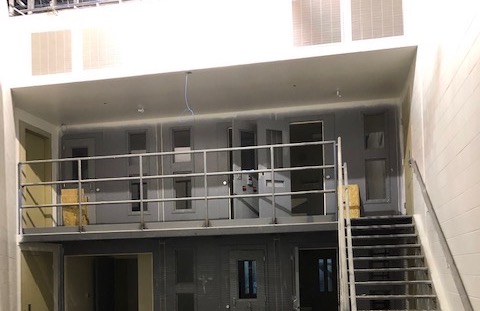 There are about 3,000 jails operating across the United States, and local government spending to keep them up and running now tops $25 billion. That’s a 521% increase in the last 40 years despite overall crime rates and jail admissions declining by about 20%, according to Pew Research.

The story is a bit different when you focus on particular states, however. Iowa and Wisconsin rank #1 and #2 respectively for having the highest jail admission rates in the country. The result? Overcrowding is a major concern in these two states. Combine those stark findings with the fact that many local jails are aging or in disrepair, and the need for upgrades or new facilities is evident.

Many Iowa and Wisconsin sheriff’s departments and county boards are in the midst of evaluating the need for a new jail facility in their communities. As part of that construction process, they may be considering whether to use the traditional construction method or opting for prefabricated jail cells.

It’s important to understand the pros and cons of prefabricated jail cells and get answers to the most frequently asked questions when weighing your options.

What is a prefabricated jail cell?

A prefabricated jail cell — sometimes referred to as a modular jail system — is a self-contained jail cell that is manufactured off site and transported to the construction site. It comes ready to install with lights, toilet, sink, bunks, utility access holes, and other options as needed.

Unlike traditional jail construction that is built with masonry and then outfitted with the necessary elements, each prefabricated detention cell is self-contained and made of heavy-gauge, rust-resistant steel. They are transported on trucks where they are lifted into place by a crane. Modular units can be stacked on top of each other for multistory facilities.

What are the benefits of prefabricated detention cells?

Time. Because each unit is produced in a factory, there are some efficiencies to be gained. Production of individual jail cells can take place during the same time that the foundational construction is underway, resulting in time savings compared to sequential scheduling.

Space. Steel wall panels are thinner than traditional concrete walls. If your construction site has space constraints, prefab jail units are one way to address them.

Streamlined process. Once construction starts, there’s less coordination between various vendors because the manufacturer of prefabricated jail cells includes many of the features in their final product. A construction manager won’t need to coordinate as many contractors or vendors for furnishings, construction materials, finishes, installers, etc.

What are the disadvantages of prefabricated detention cells?

Cost. For an average county jail in the Upper Midwest, you can expect to pay up to one-third more for prefabricated jail cells than for traditional masonry construction. When factoring in time savings on labor for construction crews, however, the difference may be less.

Shipping. Most prefabricated jail cells are manufactured in southern U.S. states, so freight costs can be extensive depending on the distance they need to travel. Up to four units typically fit on a semi truck, so if you have 50 units, costs can add up.

Carbon footprint. Structural steel has one of the highest embodied carbon footprints of any construction material, much higher than concrete. About a ton of greenhouse gases are released for every ton of steel. Over-the-road transportation of the units also produces extra emissions. In general, traditional jail construction is considered a much more sustainable construction model.

Noise levels. Compared to traditional masonry walls, steel core walls can be exceptionally loud and create echoes throughout the facility. Inmates pounding on walls, closing detention doors, shouting, and other noises reverberate, creating an unpleasant atmosphere for other inmates and correctional officers on duty.

Less flexibility. Large-scale jail projects can sometimes take years from the initial planning phases until completion. During that time, there are often updates that can impact the design. Traditional construction allows for more flexibility to adapt to those inevitable changes. For example, if HVAC hookups in each jail cell need to move 6” due to system configurations in the mechanical chase, there’s no way to accommodate those changes if the rough-ins were already cut into the prefabricated cell at the factory.

When is it best to use prefabricated detention cells?

When time is of the essence, it’s worth considering the use of prefabricated jail cells, as it could save up to six months on a construction schedule. The time savings could be beneficial in the event a local government receives grant money that needs to be spent by a certain deadline. Other circumstances may call for quicker completion such as an urgent need to address overcrowding or pressing inmate safety concerns due to deteriorating building conditions.

Prefabricated cells might also be appropriate in a densely populated area such as a downtown district or where other buildings are nearby. Because each cell can simply be lifted off a semi truck and put in place, it can minimize noise and disruption to surrounding properties.

Portable jail cells are typically used in new construction, not renovations, as integrating them into an existing facility can present challenges.

Do I still need a construction manager?

Prefabricated jail manufacturers do not provide all the construction services a project requires. A project owner still needs to hire a qualified construction manager, architect, general contractor, and subcontractors to design and oversee the site preparation, construction, installation, inspections, and more. The construction manager will also help build community support and serve as a liaison with local officials and Department of Corrections (DOC) representatives to ensure compliance.

Prior to installation, all foundational work and associated utility placement has to be planned and constructed. There is still quite a bit of finishing work that needs to be done onsite by a construction team once the units are in place, including welding, security caulking, priming and painting of adjacent areas, flooring, electrical, and other utility hookups.

Prefabricated cells can be designed to comply with DOC regulations and be configured into a podular or linear jail design. The secure pod area — inmate cells, dining area, programming, etc. — is typically the only area made of steel units.

An area that will need to be constructed of masonry includes the perimeter walls, ensuring that the exterior view of the facility is aesthetically pleasing. Other examples include administrative offices, booking and holding rooms, detox rooms, padded cells, and specialty areas like food service, laundry, and visitation. Facilities also need to have secure negative air cells for medical observation to limit the spread of diseases.

It’s important to hire a qualified construction manager for a jail project early in the planning process. They will assist with more than just the design and construction of a facility; they will also work closely with stakeholders to assess which building model is a fit for their community and oversee every aspect of the project through to completion and beyond.

Understand the process more clearly by downloading our complimentary Guide to Jail Construction Planning below. We’re sure you’ll find it helpful. Contact our jail construction experts to talk through your challenges and address other questions you may have.

← Unique Considerations for Jail Design, Architecture, and Construction
When and Why to Consider Construction Phasing and Sequencing →

When and Why to Consider Construction Phasing and Sequencing